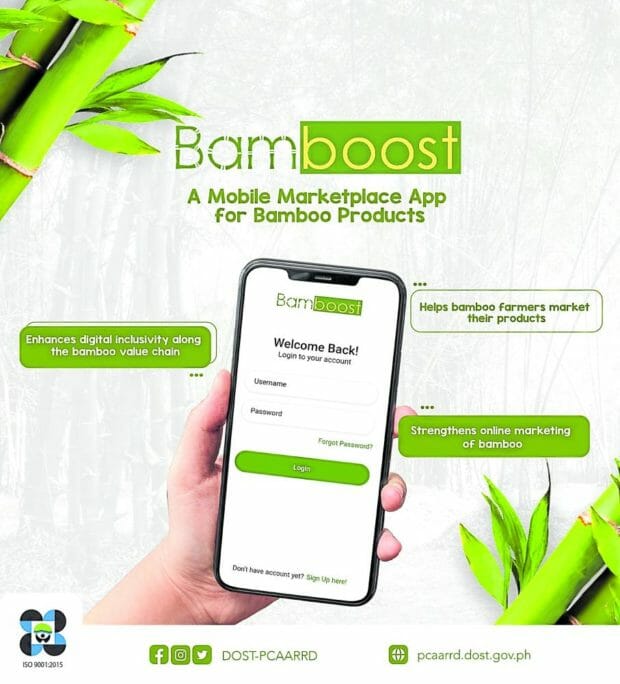 MANILA, Philippines — An online marketplace is being developed for products made from the not-so-owly bamboo — that wide variety of grass for which the country has a thriving industry.

Filipinos can help support bamboo growers through the “Bamboost” app – a “mobile marketplace” developed by the University of Science and Technology of the Southern Philippines-Cagayan de Oro (USTP-CDO).

A “user test” of the app took place on May 24 at Mindanao-Iligan State University Institute of Technology.

According to the USTP-CDO, the event also served as a soft launch for Bamboost, which is only in its initial phase.

But the bamboo growers who took part in the user tests were “excited to try the app”, according to the university.

Fred Dinoro, one of 12 participants, said the app will be “a big help to us farmers”.

He added that “if it develops well in the future, one day we will have a better economy.”

Speaking in Cebuano, he said attendees were initially thinking about how the app could be useful to their community. But they realized early on that it could have “greater market reach.”

The USTP-CDO said in a statement, “The user test is intended to introduce the Bamboost app to bamboo farmers, processors and entrepreneurs who will eventually be the target customers once it is already operational.”

Apart from Iligan City, the provinces of Bukidnon and Iloilo are the other “initial target sites of the [Bamboost] project where the app is to be adopted,” the USTP-CDO said.

According to the project leader, Associate Professor Love Jhoye Raboy of USTP-CDO’s Department of Information Technology, the app will undergo another user test in Iloilo this month.

The Bamboost project is funded and supported by the Philippine Council for Agriculture, Aquatic and Natural Resources Research and Development (DOST-PCAARRD) in the Department of Science and Technology.

The USTP-CDO said the project was developed based on the “result of the thesis” of Analiza Diaz, staff member of DOST-PCAARRD’s Technology Transfer and Promotion Division, for her masters program at the Asian Institute of Technology in Thailand.

“We believe that the successful implementation of the project – from the creation, launch and integration of the Bamboost application, [to] its intellectual property registration and introduction to farming communities producing various bamboo products – will eventually lead to its commercialization in the years to come,” said Jose Tomas Cabagay, Deputy Director of said division.

Bamboo is one of the most economically important non-timber forest products globally. It is considered a valuable crop and a versatile material for many products, such as wooden furniture, wall panels, bicycles, utensils, handicrafts, and bamboo-based foods and beverages.

The Philippines is among the top exporters of bamboo, ranking 6th in the world, according to DOST-PCAARRD.

—WITH AN INQUIRER RESEARCH REPORT

Google will integrate bank accounts into the payment application

The latest tech news delivered to your inbox